With the cold crisp in the morning air, the snap of autumn leaves under your feet, and the Pumpkin Spice latte in your hand, fall is finally here. And that means it’s almost time for Halloween. Most Portlanders are aware of our city’s strange and eerie past with places like the Shanghai Tunnels and the famously haunted Pittock Mansion, so take a look at a few more interesting Portland properties with some disturbing histories.

This forgotten home site sits across the river from the Waverly Club. The foundation was originally part of Oregon’s old water pump house. Legend says the builder and owner’s spirit still wanders the hallsâespecially in the elevator shaft where it is rumored he took his own life. Visitors have experienced doors mysteriously locking and lights randomly turning on and off.

The stone ruins of a 1950s park ranger station are rumored to sit above what was once an old trading post from the 1600s. The land was originally owned by the Balch family in the mid 1800sâcreating the start of an eerie past with the father Danford Balch who claimed his wife bewitched him into committing murder. The land was eventually divided up and given to the City of Portland in 1897 to be used as a park. Today, visitors who seek out the shack claim seeing strange orbs and apparitions. 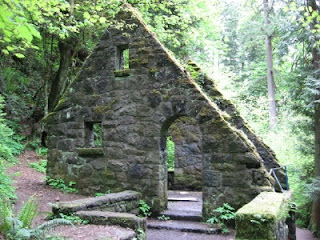 The White Eagle Saloon originally had a less than ideal reputation on Mississippi Avenue in Northeast Portland. It was once considered the saloon and brothel of choice for Portland’s roughest crowd where bar fights got out of hand on a daily basisâresulting in the nickname “Bucket of Blood.” The old brick building, which was built in the early 1900s, is rumored to be haunted by a working girl named Rose, who met an untimely death by the hand of a jealous lover. McMenamins eventually bought the building and now it functions as a popular neighborhood haunt known for its live music.